After a tumultuous Q3, European nitrates prices have been under downward pressure since October. A less hostile gas feedstock market spurred the resumption of vast swathes of European nitrogen production.

While the loss of production in the summer months will have a bearing on overall inventories, few buyers saw any reason to step into the market. This has placed producers and suppliers in a precarious position, with offers sliding since early/mid-October.

From early August to early September, European nitrates prices increased by around €125-150pt from the low €700pt cif for CAN in Germany, and low/mid-€800pt CPT for AN in France. Prices were established at these historic highs by mid-September, with AN prices in France only a shade below €1,000pt CPT.

The price increases were spurred on by the rapid advance in gas prices to historic levels. These inevitably led to widespread production shutdowns with the Dutch TTF gas price hitting €350/MWh ($104mmBtu) at one point. Of note, the multi-year average gas price was around €20/MWh prior to September 2021.

However, by early/mid-October, prompt availability of gas in Europe was high due to short term storage issues. Front-month values eased, but the most notable declines were in the day-ahead market. This declined to the low-€20s MWh by the beginning of November and was at a discount of €80-100/MWh to the month ahead price.

Several producers, particularly those in eastern Europe, opted to roll the dice, securing gas for the next 45-60 days to support the restart of nitrogen production. The German CAN market began to receive offers of material from Poland and Lithuania. Those suppliers reliant on imported ammonia or with access to cheaper gas were no longer the only ones offering in the market.

Against this backdrop, the restarts led to a downward decline in prices. Indeed, the latest nitrates prices, at around €600pt cif Germany for CAN and the low-€700s pt CPT for AN in France, are below the early August levels.

Crucially however, gas prices have once again increased. The day ahead gas price is at parity with the month ahead price at around €120/MWh, removing the cheap source of gas for producers.

As noted above, the producers that restarted in October were reported to have secured gas for between 4-8 weeks of production at the lower prices. This would imply that by mid/late-December most of the raw material secured at the lower prices should have been utilised.

Production costs basis imported ammonia are significantly lower. However, for most of the producers that shut down production in Q3, importing ammonia was not, and continues not to be an option.

For the moment, buyers remain on the sidelines as the market edges towards the festive break. Yet, beyond the end of this year further profitable production of nitrates basis gas in Europe seems doubtful should the current trends persist, suggesting that Q1 2023 could prove lively. 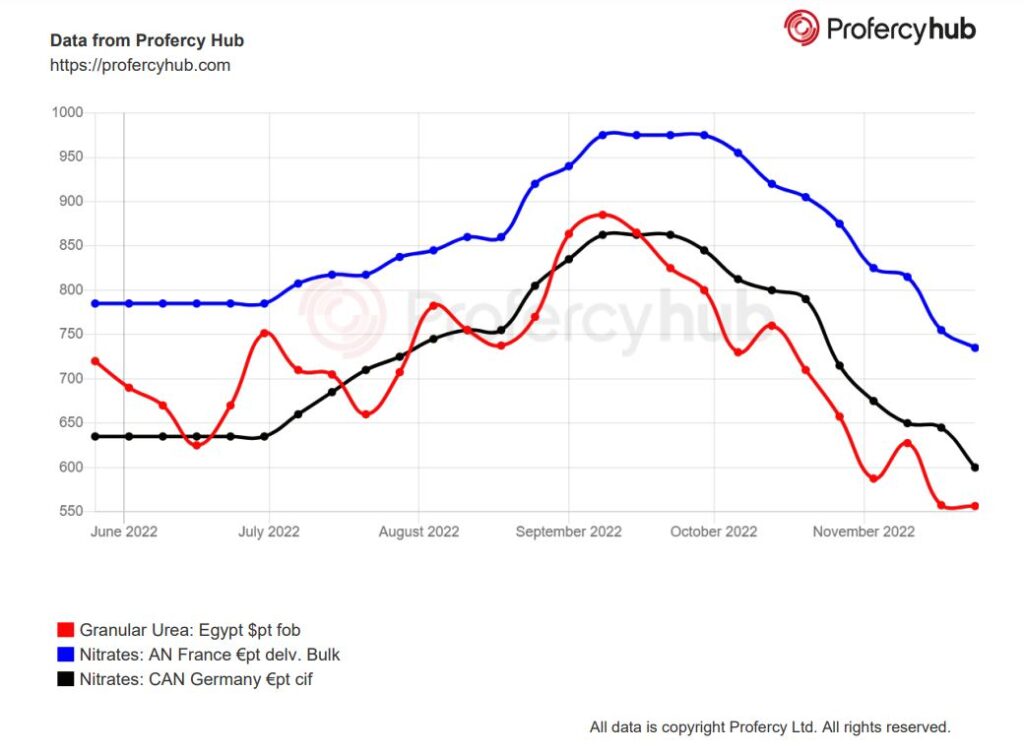